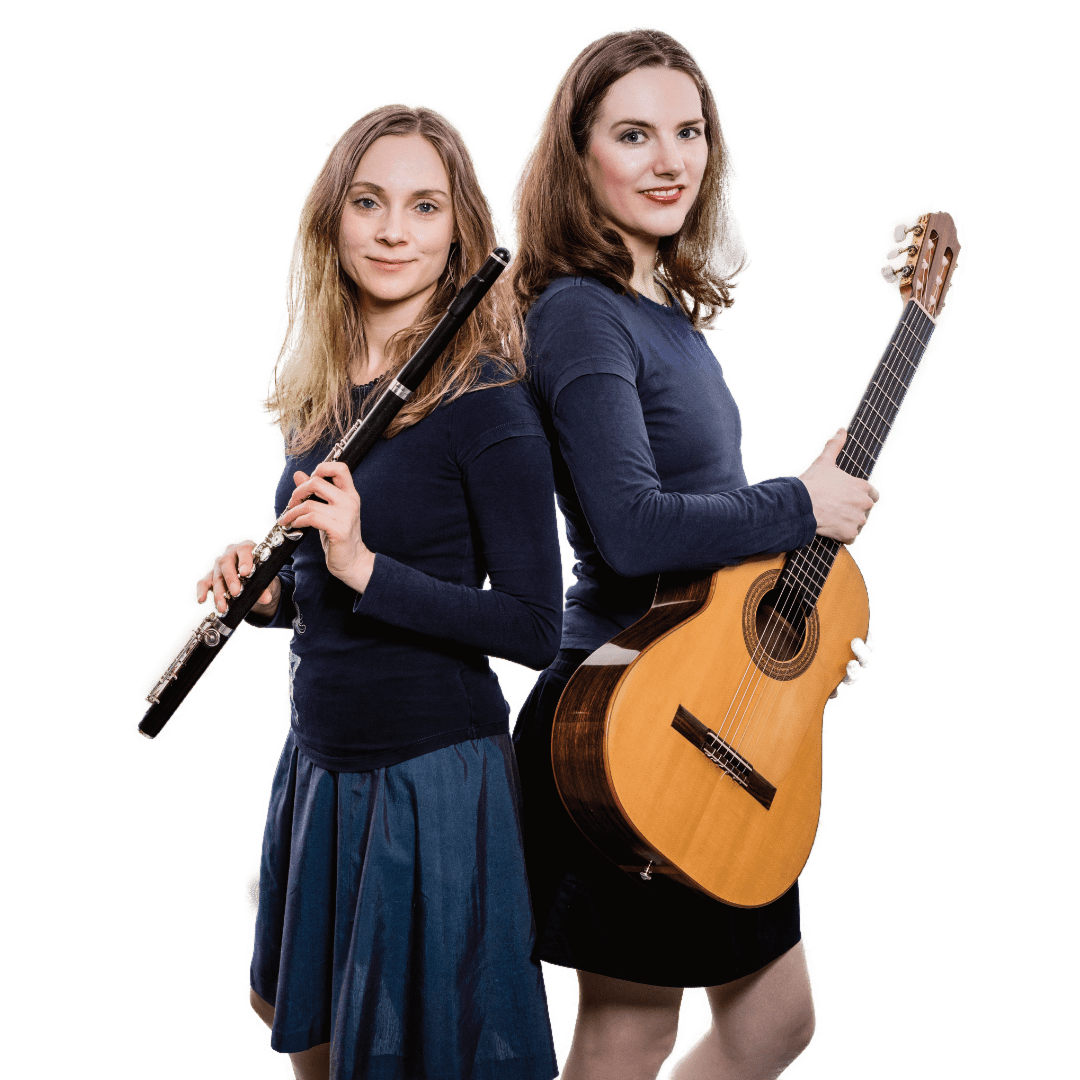 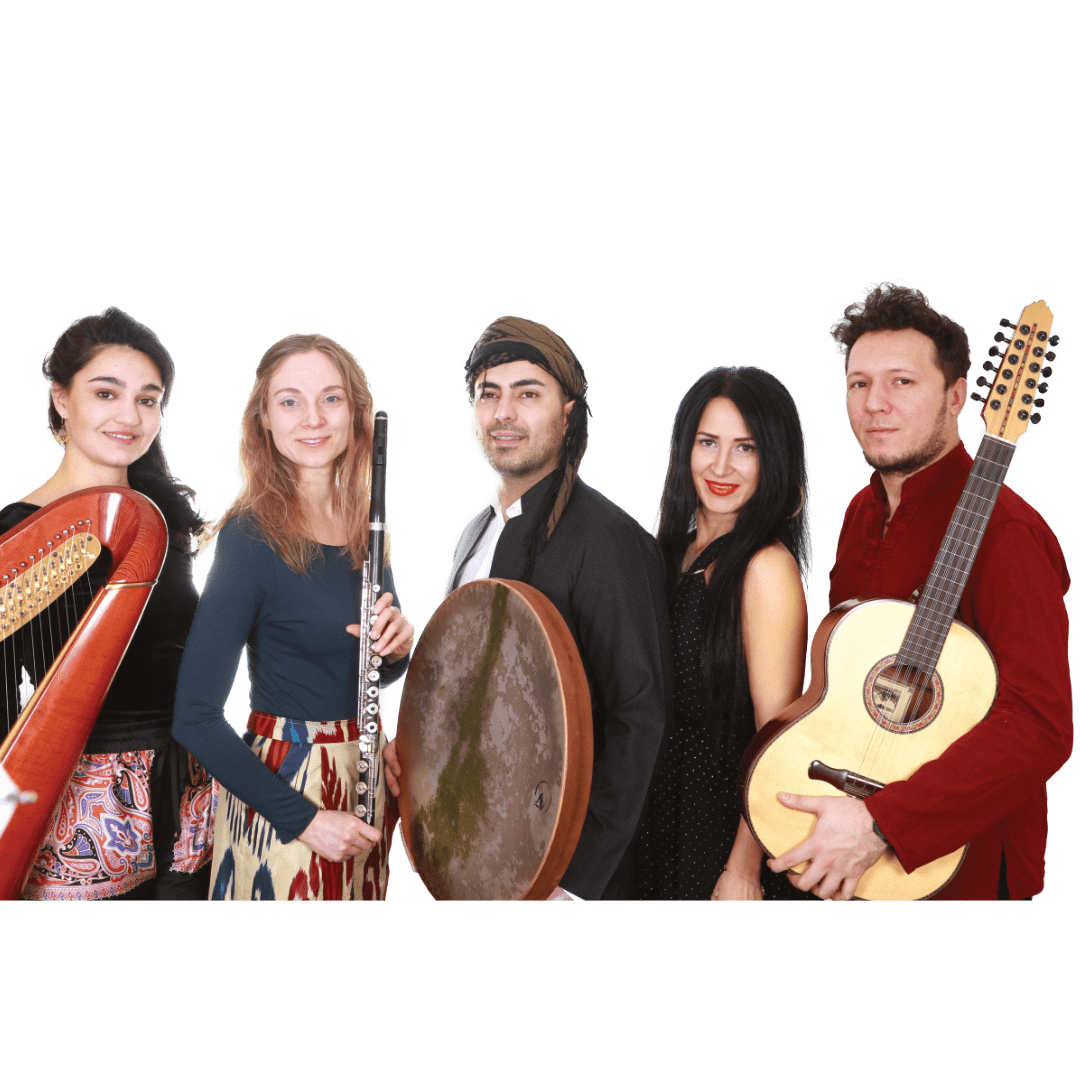 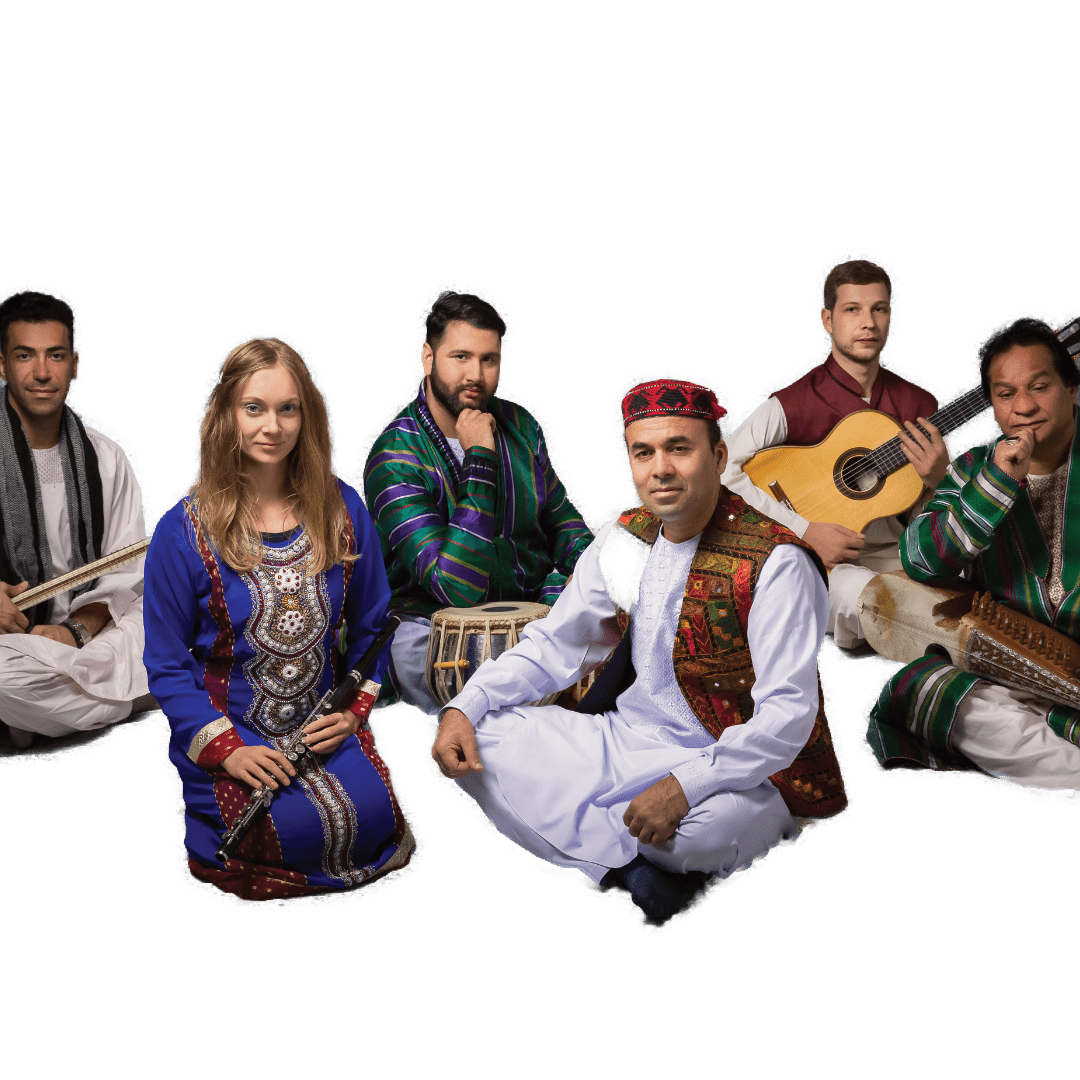 ELVENHAIN has been performing moderated children’s and baby concerts in the Rhine-Main area and throughout Germany since 2011. Performance venues include theaters, schools, kindergartens, libraries community centers and children’s birthday parties.

At the beginning of 2013, the first CD “Elvenspiel” was released. A second CD “Classical Music for Children” was released in the fall of 2018.
More info: www.elvenhain.de
Booking and CD order: info@johanna-leonore-dahlhoff.de 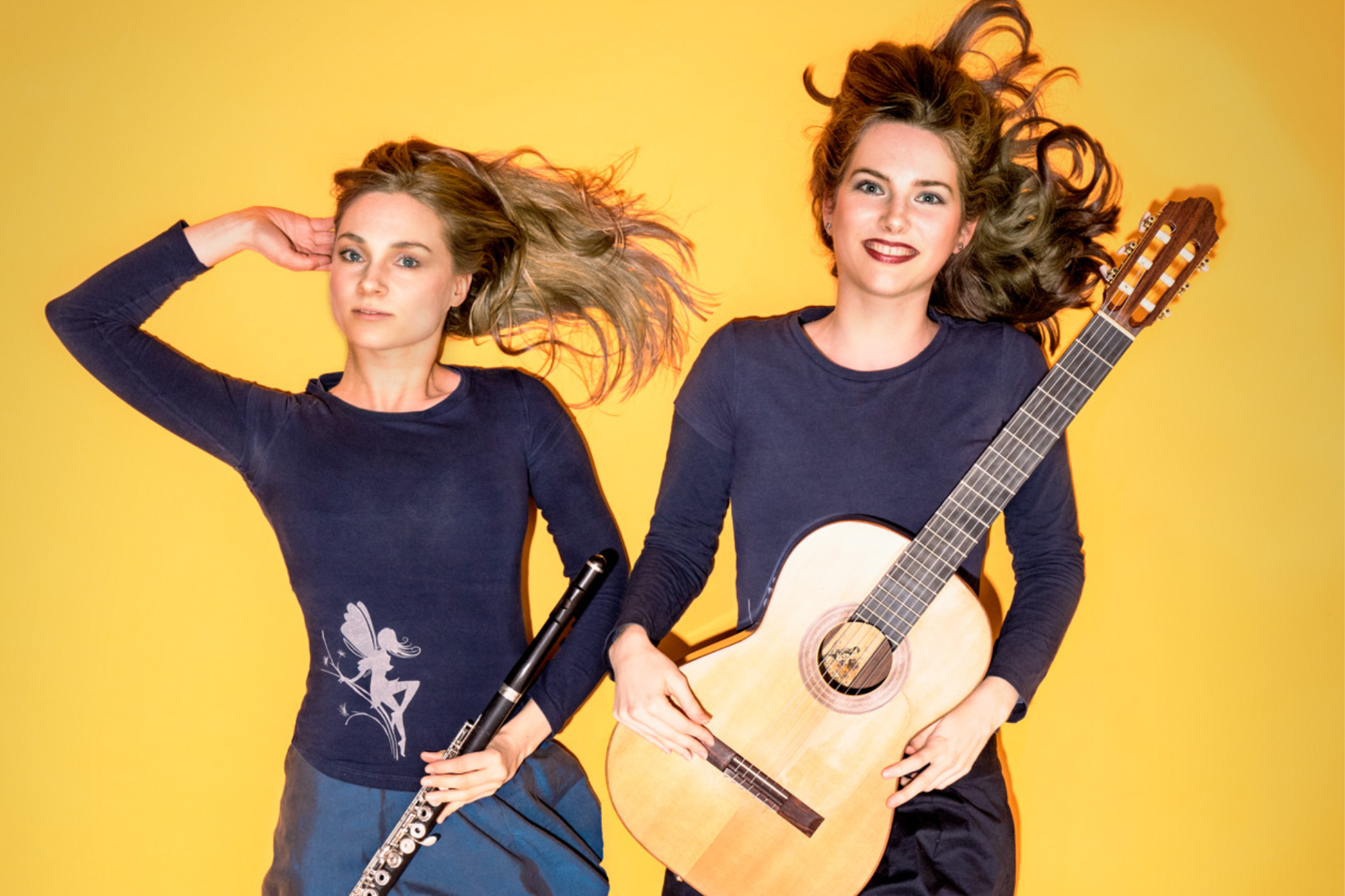 Grupo Maloka was founded in the fall of 2018 as part of Bridges – Musik verbindet in Frankfurt and combines Latin American music with Persian sounds, Eastern European folk songs and Irish folk: from all corners of the world, this group comes together to musically build a house – Maloka. The word Maloka comes from the indigenous peoples of the Amazon and refers to a simple house made of straw and wood, which is at the same time a hostel, a place for community, celebrations and ceremonies, thus creating space for a whole society.  Grupo Maloka arranges traditional music from the musicians’ countries of origin as well as other folklore in the typical Bridges style: musical instruments and styles that are not traditionally played together find a common home here.

The musicians of Grupo Maloka: 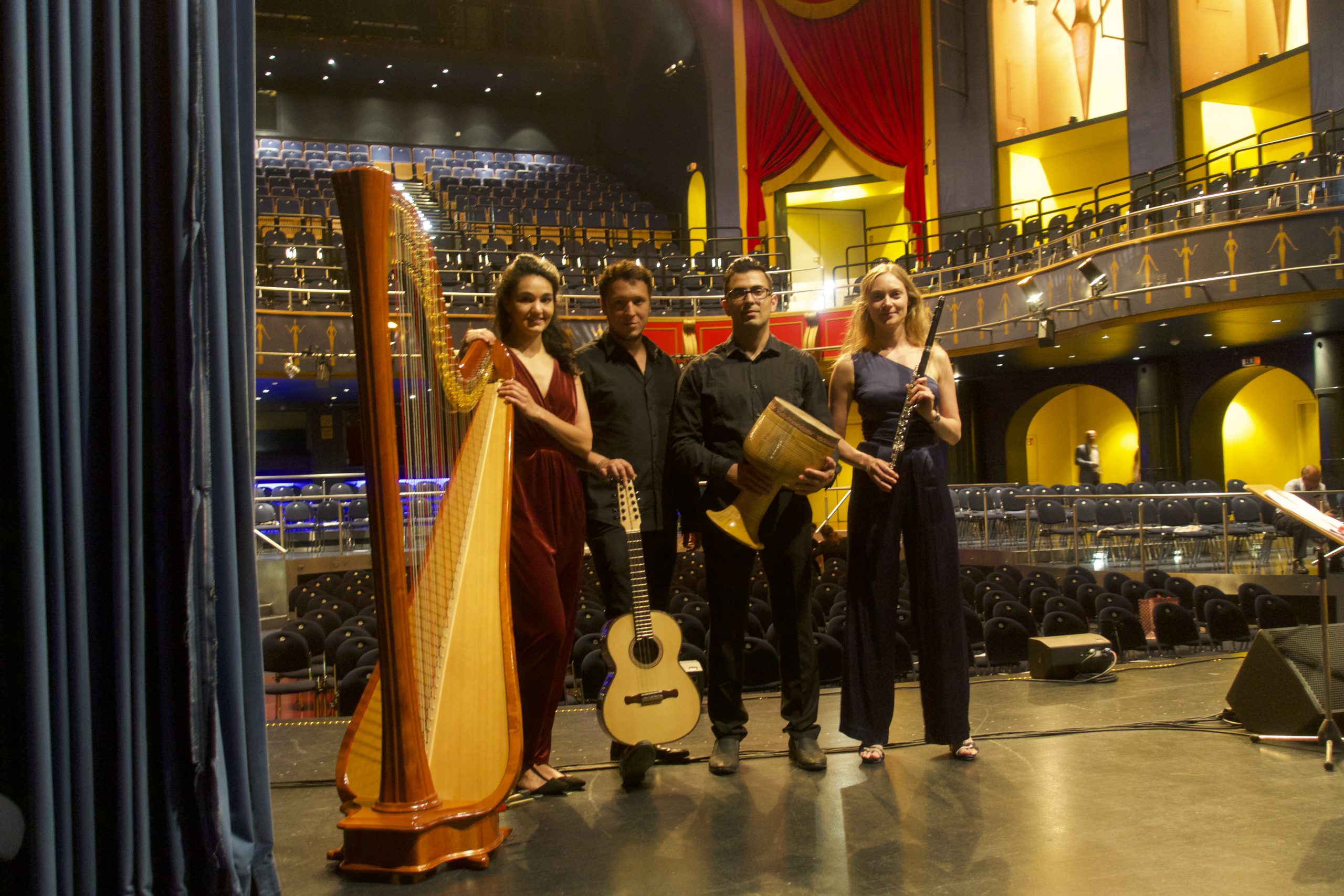 The Afghan-Iranian-German ensemble Hope found each other in early 2016 as part of Bridges and has since played numerous performances – including at the Brotfabrik Frankfurt, the Kaiserdom in Frankfurt, the hr Open Air at the Weseler Werft and the International Flute Festival in Munich. The ensemble plays mainly classical as well as popular Afghan and Iranian pieces with European influences. 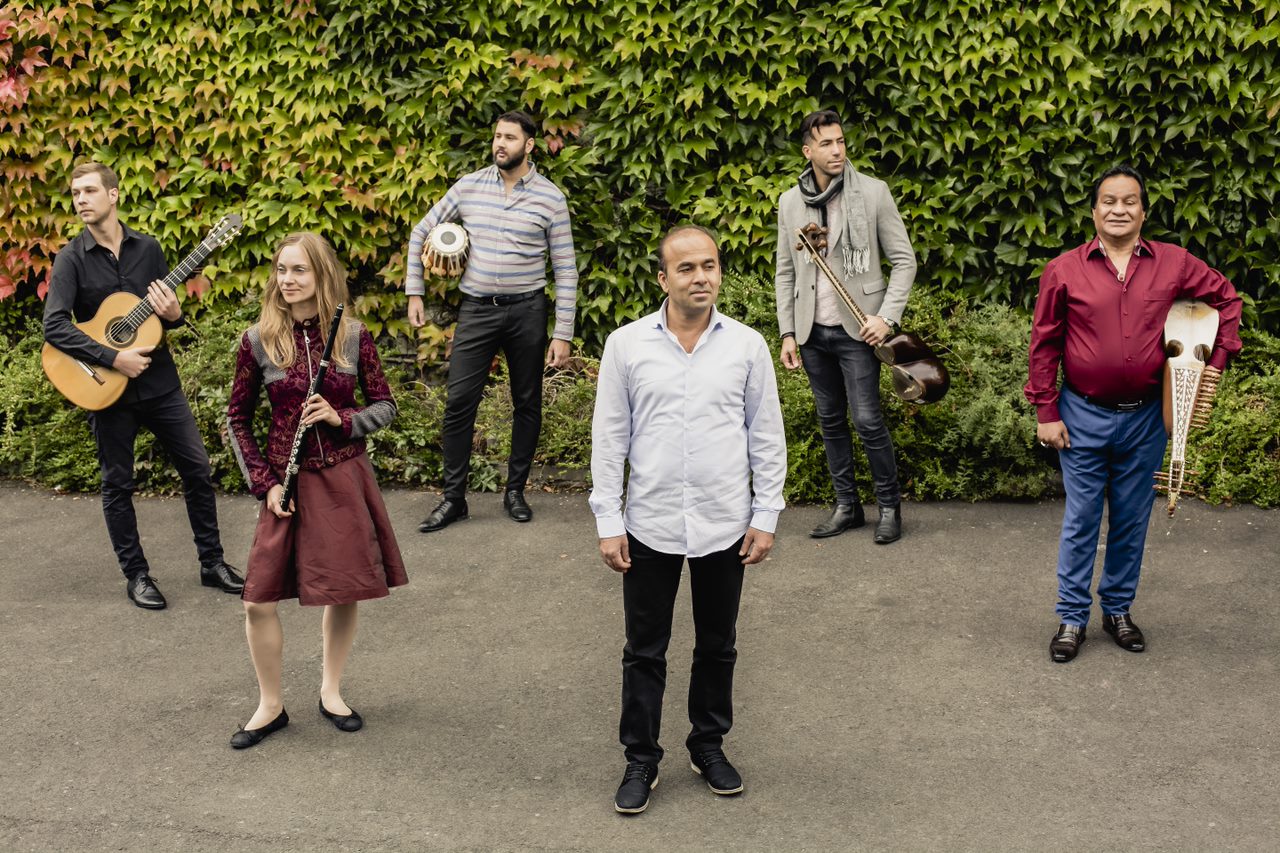 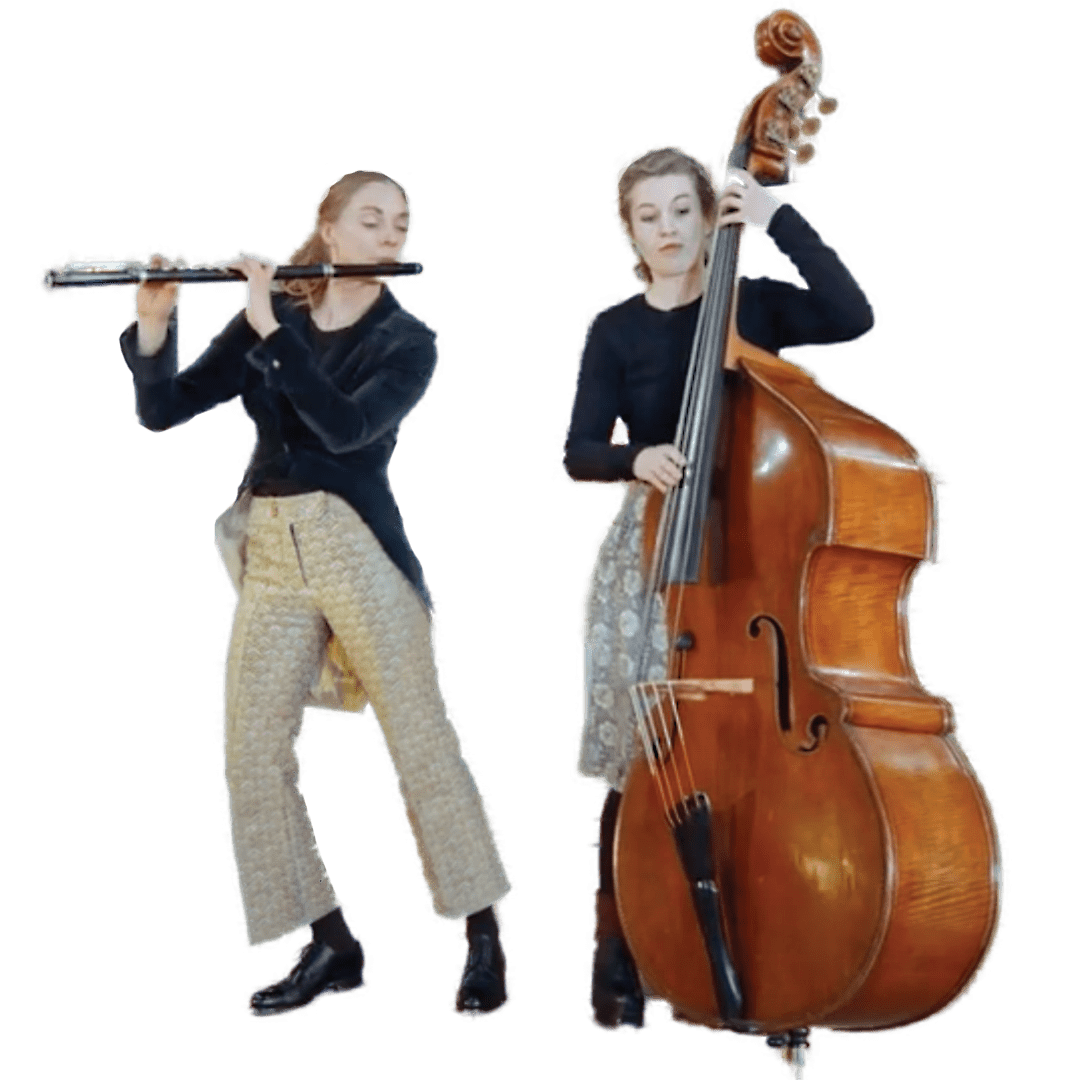 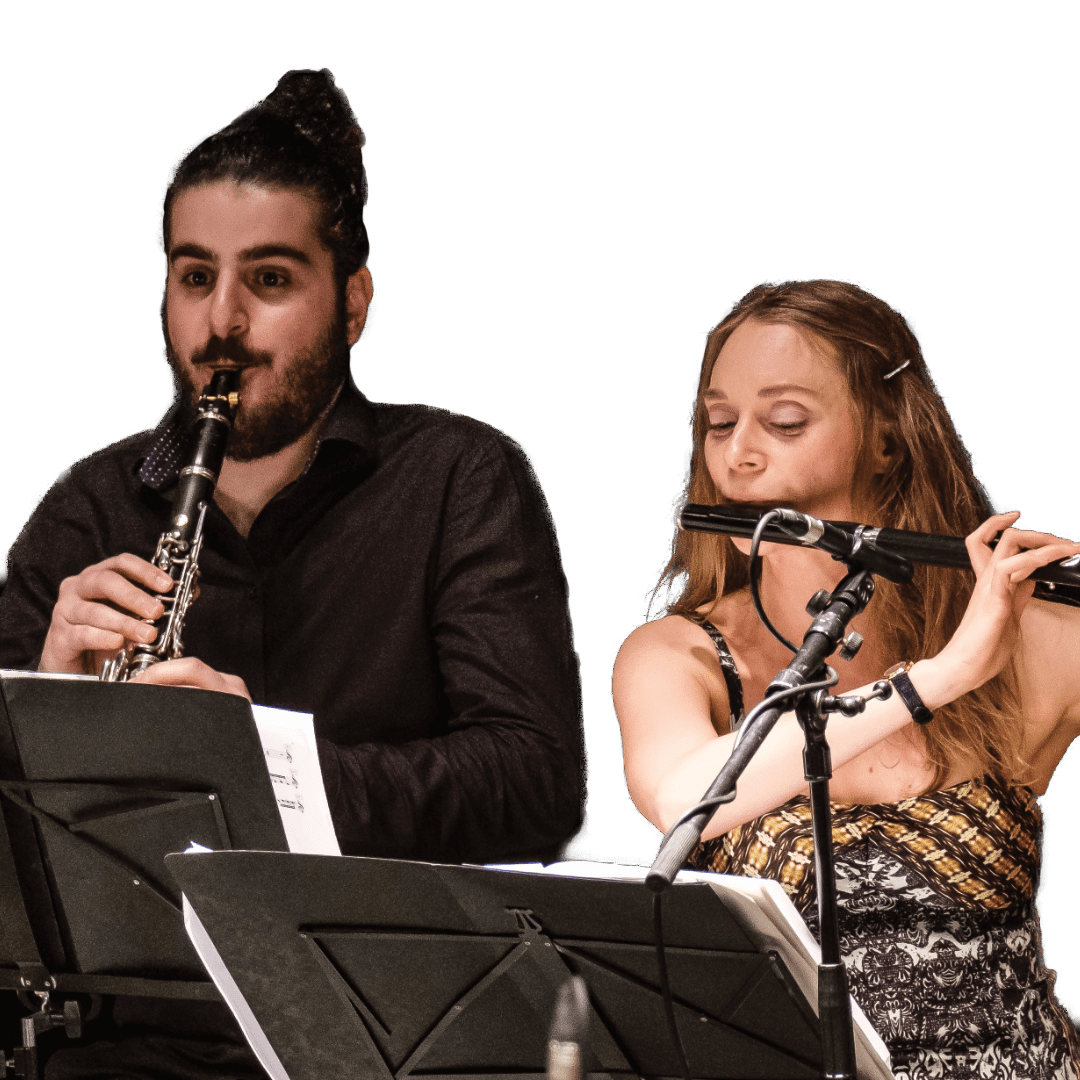 The ancient coastal city of Ugarit (in present-day Syria) holds one of the greatest treasures of musical culture: here, around 3400 BC, the first musical notation was recorded in the form of a clay tablet.

The six musicians of the Ugarit Band got to know each other at Bridges – Musik verbindet and merge their different cultures and musical styles in a fascinating way. The musicians from Syria, Greece and Germany play traditional Arabic music as well as music from the Mediterranean region and interweave it in a unique way with the tradition of European classical music. The typical Arab instruments oud and kanun meet the classical flute. And the violin, known in Europe as a classical instrument, gets an unmistakable oriental color with Ugarit and enters into a dialogue with a fretless electric bass.

The members of the band, Walid Khatba (violin), Johanna-Leonore Dahlhoff (flute), Eleanna Pitsikaki (kanun), Hesham Hamra (oud), Simon Zauels (electric bass) and Youssef Laktina (percussion), have already performed worldwide in famous concert halls and at renowned festivals. The band members have performed at the Istanbul Jazz Festival, the BBC Proms at the Royal Albert Hall London, the Roskilde Festival in Denmark, the Elbphilharmonie Hamburg and the Berlin Philharmonie, the Jazz Open Stuttgart, as well as in Argentina, Dubai, Japan, Madagascar, among others. The musicians of the Ugarit Band have performed with renowned orchestras such as the Syrian National and Syrian Philharmonic Orchestras, the Rotterdam Philharmonic Orchestra, the European Union Youth Orchestra, Opera Mauritius, as well as with the Gorillaz Band. 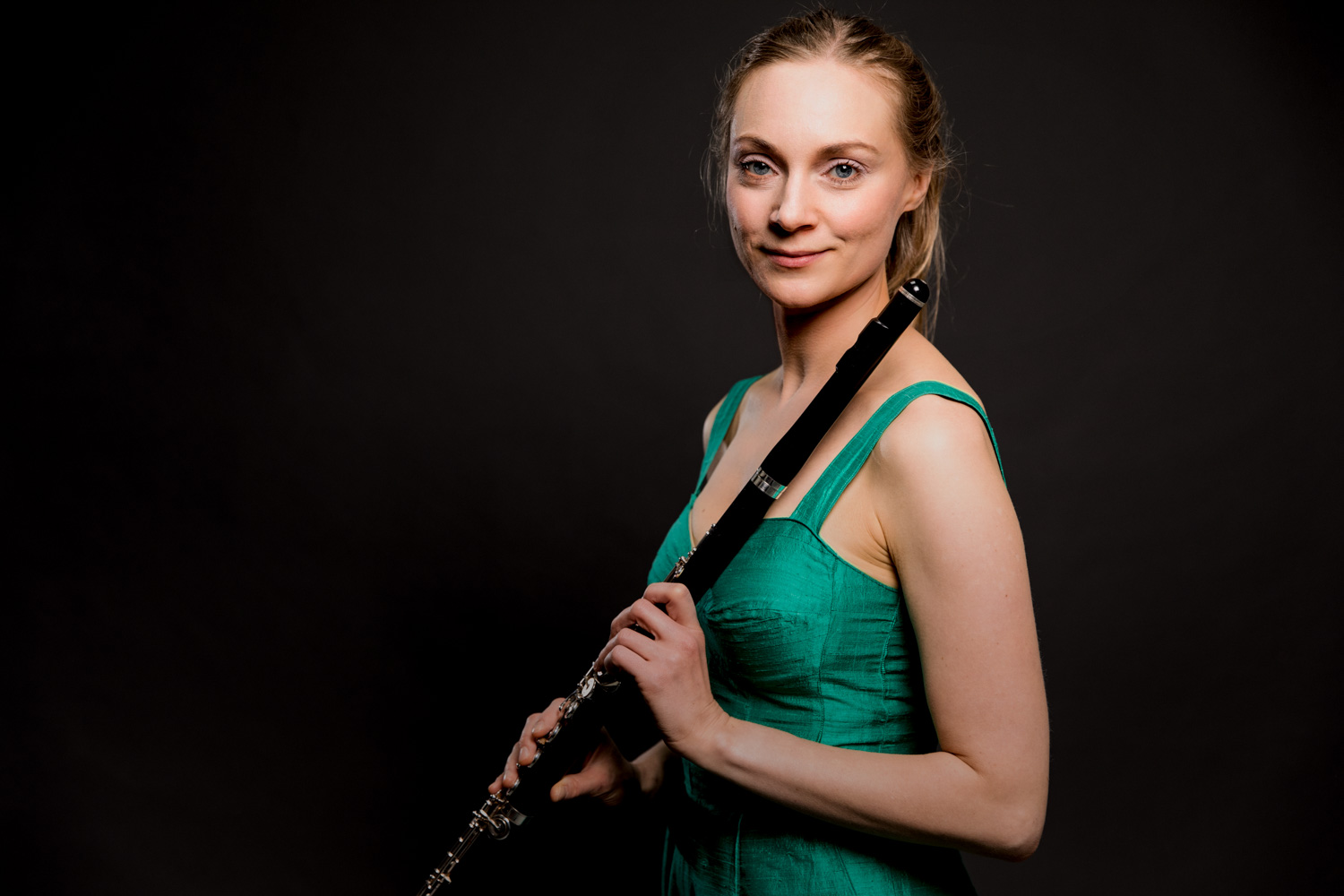 The Bridges Chamber Orchestra, founded in 2019, brings together approximately 25 Bridges musicians and their instruments from the Orient and the Occident, the Far East and Latin America; in this way we expand the classical European orchestral culture. We see ourselves as a democratic, participatory orchestra, because instrumentation and repertoire depend on our musicians. We take music from all the musical cultures of the musicians involved and combine it with classical European orchestral playing, creating a special blend. By learning from each other and getting involved in new terrain – e.g. as European musicians on Arabic quarter-tone scales or as Oriental musicians on classical orchestral playing – we clarify our idea of integration. 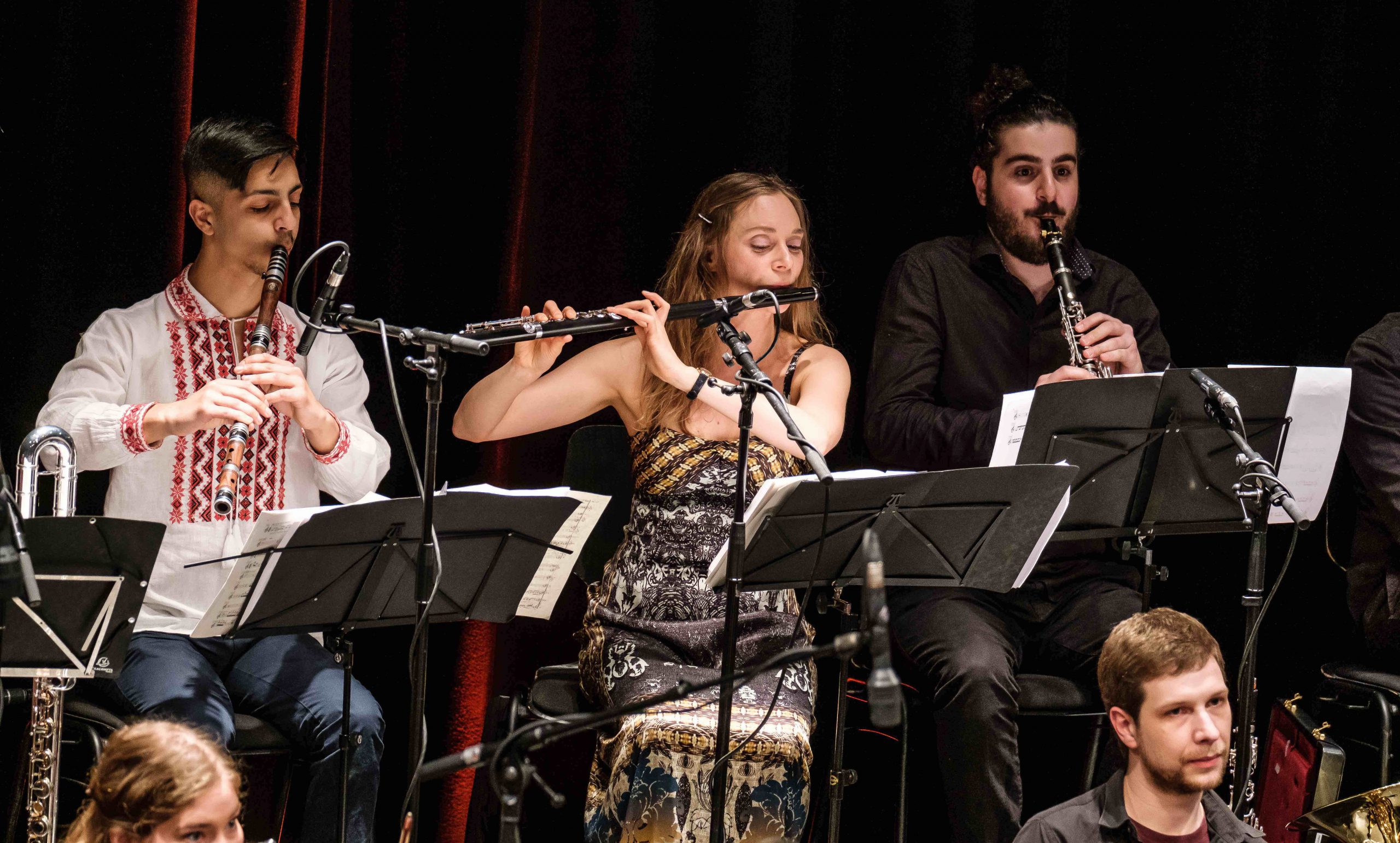